Following the triggering of Article 50 of the Treaty of the European Union last week, a lot has been said about the future of the UK videogames industry post-Brexit, including this article by The Guardian claiming that 40% of companies are considering relocating and this press release by TIGA’s CEO Richard Wilson in which he outlines the organisation’s vision to ensure the UK remains one of the best places in the world for games development.

While it is clear that we have entered a period full of uncertainties, from the effect of the rising prices of games in light of a weaker pound to how Brexit will affect the sourcing of talent from EU countries or if the UK will remain an attractive location to open studios for foreign companies, we should not forget the many opportunities that are available for games companies in the wider market.

The UK games market is export-based and will continue to be. According to TIGA, 95% of UK games development studios export at least some of their games. Although it remains to be seen if the ease of access to market that Europe provides at the moment will remain, there are plenty of other markets worth exploring. For instance, China is still the largest videogames market, closely followed by the US. And there are plenty of other non-EU countries in the list of the 100 top countries by game revenue, as per Newzoo’s report: https://newzoo.com/insights/rankings/top-100-countries-by-game-revenues/

Some markets, such as Japan, Russia and Brazil have been popular for quite a while, and UK developers have been increasingly exporting to them. But there are many other up-and-coming markets which have seen significant growth.

This graph shows the revenue and growth in the main regions of the world: 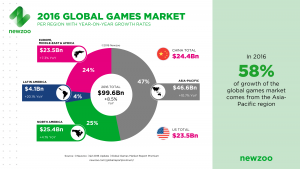 As it can be seen, there has been significant growth in the Asia-Pacific and Latin America regions, as well as in the Middle East and Africa. Countries like Turkey, Thailand and Indonesia are becoming increasingly lucrative to game developers, and there is a world of opportunities out there, quite literally.

Through the use of effective localisation, it is possible for developers to tap into these lucrative markets, attract a much higher number of players and increase revenue significantly. In light of Brexit, perhaps it is more than ever time to look at the wider world.