As translators and interpreters know, it is very important to bridge the gap between cultures. In certain disciplines, the meaning and the effect that the text has on the reader is far more important than the words. This is especially true of localisation, which has been defined as the “adaptation of a product, application or document content to meet the language, cultural and other requirements of a specific target market” (Ishida & Miller: 2005).

In the specific field of games localisation, this adaptation goes well beyond the words. As we all know, different cultures perceive things in different ways so, if a product is to be successful, it’s important to make sure that it adapts to the target markets, as the picture below amusingly shows. In fact, at least 50% of the revenue in games comes from localised versions (Chandler: 2006), which shows why localisation efforts should not be underestimated. 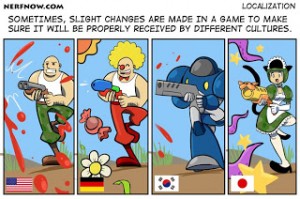 A while ago, we had the pleasure of witnessing a very interesting presentation by Melissa Clark-Reynolds, Founder and CEO of MiniMonos, a company which provides a virtual world for children in which they can create a monkey avatar, socialise with other monkeys and play minigames. She spoke of how sometimes they release minigames adapted to their local markets. One interesting example was a minigame which involved monkey poo, as can be seen in the following pictures. 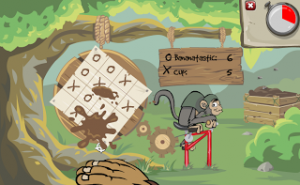 This type of minigame would have never worked in the Australian or New Zealand markets, for instance, where children are not as obsessed with their digestive system as they are in the UK. Despite speaking the same language, the cultures in these countries are different and being able to adapt to British “tastes” (if we can call it that in this case!) proved an extremely effective strategy, making this one of the most successful minigames for the company in the UK.

Another company in the world of online gaming, Zynga, famously decided to enter the Chinese market a couple of years ago. They rebuilt the game Farmville and, although the Chinese version is quite similar to the original Farmville, there are some changes that reflect the preferences of this target market. For instance, some changes were made to the colour palette and the plots of farmland are larger than in the original version.  And some new crops were also introduced, as can be seen in the picture below:

These crops, like the ginseng or the Caterpillar fungus, reflect the kind of crops that would grow in the region.

All this has huge implications for the games localiser, who must not only be a master of the written word, but also become a language consultant, and provide advice to clients when they come across something that could cause a potential issue in the target market.

Some time ago, our CEO Silvia Ferrero was working on a Japanese game for a portable device. The title included a minigame in which the characters had to compete to finish a big bowl filled with some type of alcoholic drink. The first one to finish it won the game, and the characters were depicted quite obviously drunk, and then complaining about having a headache the morning after. She had been told that the age rating of the game was 3+, so she immediately identified a problem and warned the client that a drinking minigame was going to be problematic in the target market, especially for such a young audience. All the translators discussed the problem as a team and we developed an idea to turn the drink into some sort of sugary potion and change the text so that the characters got a sugar rush instead, as children often get when having too many sweets. That saved the client a lot of time and money by not having to edit the game, and they were very grateful.

Other times, this cultural dimension can appear in the form of cultural references within the games themselves. For instance, in World of Warcraft there is a trinket called the Six Demon Bag, and its description text reads “Blasts enemies with the power of wind, fire, that kind of thing!”. This is a reference to the movie Big Trouble in Little China, in which Egg Shen describes the contents of his Six Demon Bag using the same words. In these cases, it’s important for the localiser firstly to identify the reference, and secondly, to look for the equivalent, that is, the official version of the movie in the target market (whether it’s dubbed or subtitled), and use the same wording in order to achieve the same effect that the original version of the game aims for.

Another important cultural aspect is related to characterisation. Many games contain fantasy characters such as orcs, wizards, fairies, but also pirates, gangsters and similar. The localiser will need to be familiarised with the way those creatures or characters speak in the target language and follow the conventions. It could be possible that an equivalent accent might need to be found in the target language to portray certain stereotypes or, lacking that, the use of certain interjections, expressions or pet phrases. Rude language and swearing can be particularly tricky because, whilst the effect on the player has to be maintained, cultural sensibilities also have to be taken into account. Some languages and cultures are more accepting of this type of language than others.

Of course, all this doesn’t mean that the content always has to be adapted. Sometimes aspects of the source culture have to be kept in order to maintain a certain local flavour. It wouldn’t make much sense for a game clearly based in New York, where the city is central to the story, to have characters speaking with a very marked regional French accent, for instance. However, both localisers and developers need to be aware of these issues and use their skills and expertise to ensure that the localised product meets all the requirements and needs of the target market if the product is to be successful. After all, this is a business, and the better the quality of the localisation, the higher the potential for revenue.